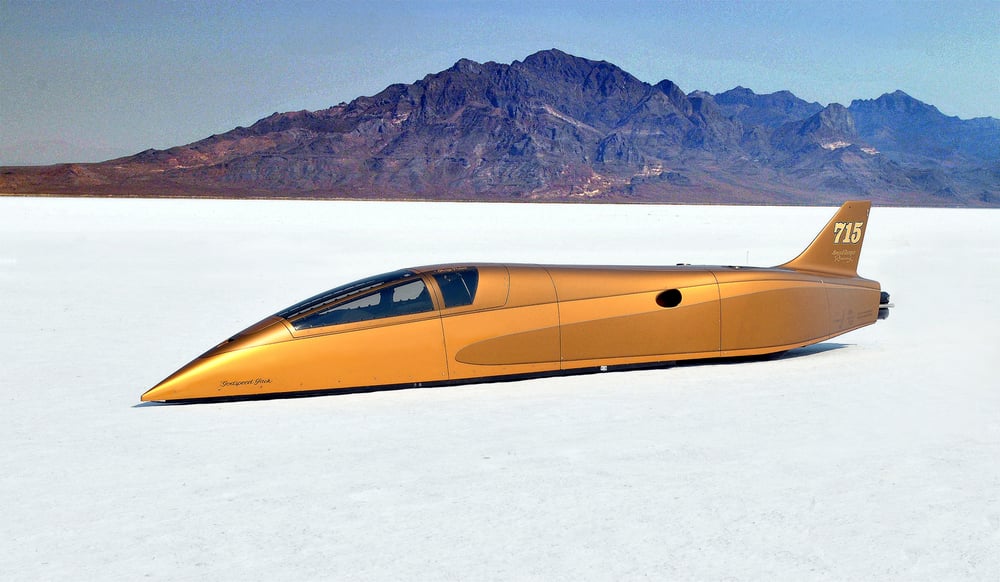 Team Speed Demon owns the title of fastest piston-powered, wheel-driven car on the planet. Their salt-flat streamliner makes upwards of 2,000 horsepower and goes over 400mph.

In the increasingly popular realm of land speed racing, one vehicle stands head and shoulders above the rest in terms of sheer performance and the ability to lay down big numbers with extraordinary consistency. George Poteet’s Speed Demon has accumulated a grand total of 38 runs over 400 mph. Most of those runs and records were posted prior to the 2014 mishap where Poteet walked away relatively unscathed from a 370-mph crash that destroyed the original Speed Demon.

The all new Speed Demon returned in 2016 after a year of reconstruction and missed opportunity due to rainy conditions on the salt flats. It immediately resumed its dominance at the 2016 Bonneville Speed Week by setting top speed of the meet with a 442.099-mph blast and a new 416.511-mph B/Blown Fuel Streamliner class record that secured the Hot Rod Magazine Top Speed Trophy for the 6th year in a row.

So why is the Speed Demon so dominant in this relatively small field of top level performers? One factor is George Poteet’s skill at extracting every bit of performance the car is willing to give and the nerve to consistently poke that dragon with the Speed Demon’s stiletto-like profile. Combine that with the methodical skill and efficiency of the crew, aptly named, “the Men in Black,” and you have a combination that makes the absolute most of every run opportunity.

But the hidden gems between the frame rails are a selection of Kenny Duttweiler-built Gen 1 Chevy small block V8s running on methanol and boosted to the moon with a pair of Pro Mod 88mm Precision Turbos forcing up to 2662 horsepower (388ci engine) through the engine depending on the tune and displacement.

The car has utilized four different engines to set numerous FIA records and SCTA records in multiple classes. They include a 300ci short stroke version, and 347, 368 and 388ci versions for different classes, all functioning reliably within a five to nearly seven horsepower per cubic inch range where even the best components are severely challenged to hold it together. The 347ci engine was built for the SCTA’s C/Blown Fuel Streamliner class and it is the one that delivered a 458 mph pass with a 462 mph exit speed. All that from a highly boosted, Gen 1 based, Chevy small block with top quality hardware.

Duttweiler has developed a winning parts list populated by robust components he believes wholly essential to the task. He specifies Diamond pistons for all the engines he builds because they provide the material and design strength he requires for engines boosted up to 60 psi; not for 5 or 6 seconds on a drag strip, but for more than 22 seconds at WOT on a 5-mile track.

This type of severe abuse is likely rivaled only by tractor pulling or power boat racing. The accompanying close-up views show a Speed Demon Diamond coated piston that has endured over 75 dyno pulls and high-speed runs on the track at Bonneville. It looks brand new. In concert with the Diamond components, Kenny prefers Crower cranks and connecting rods because they are the strongest he has found. And yet he has, on occasion, bent connecting rods and had the pistons survive.

The Diamond pistons in the Speed Demon engines are extremely tough with heavy duty thrust surfaces, thick decks and reinforced pin bosses to take the abnormal abuse. They have never disappointed even when enduring massive amounts of boost. The compression ratio with the Dart aluminum cylinder heads is nominally set at 9:1. The H13 tool steel piston pin features a DLC (Diamond Like Carbon) coating with a .220-inch wall thickness. The pistons come fully treated with Diamond’s hard anodized coating and skirt treatment. As you will note in the photos, the whole piston is coated and there is virtually no scuffing after repeated abuse.

The gas ported pistons feature precision ring grooves that accept 2-piece Total Seal .043 gapless top rings that are diamond coated with a special infusion process. The second ring is a .043-inch Napier style and the oil groove accepts a standard tension, 1/8-inch ring. The valve reliefs are pre-forged and present no interference problems as the valve sizes, angles and placement in the Dart cylinder heads are known factors. The engines use 2.230 Ferrea Titanium intake valves and 1.55-inch Ferrea Inconel exhaust valves to withstand the extreme heat generated in the combustion chambers.

A key factor in the Speed Demon’s amazing success is Duttweiler’s unique choice of small block engines. His reasoning is straightforward and purely logical. In a highly imperfect traction environment, big blocks with a lot of displacement are traction limited because they make too much torque. While they offer high power potential, they have more limited acceleration potential because they easily overcome the tires, particularly on a two-wheel drive vehicle driving only the rear wheels. A single small block favors traction and is easily boosted to big power once the car meets the traction requirement for acceleration and begins to feel the increased resistance of aerodynamic drag.

The Speed Demon is set up to run at wide open throttle for the entire pass. Hence the engine components are subjected to the effects of electronic throttling and traction control via boost modulation and ignition control in the early part of a run. With the mixture kept moderately rich, the Diamond pistons tolerate this practice without distress. The MoTeC engine management system primarily looks at wheel speed versus manifold pressure to modulate the traction control. At some point above 400 mph the front and rear wheel speeds equalize and the system comes off the traction control with full boost. At that point, the management system optimizes for power.

Duttweiler’s approach has always been to run the smallest effective displacement to ensure best traction and make up for it with engine speed and boost. All his engines run over 9000 rpm at Bonneville. In support of this, the high-end Jesel valve train is anchored on each cylinder head by a single solid bar and operated with .180-wall Trend pushrods that are double tapered on the intake side and straight on the exhaust side. The intake pushrods are 7/16-inch diameter and the exhausts are one half inch.

The 300ci engine started off at about 1900 horsepower and advanced to well over 2000 relatively quickly. It is capable of 2600 horse power if they turn the wick up all the way. Kenny points out that the 388ci engine made 640 horsepower normally aspirated which means they gained 1900-2000 horsepower with the turbos. The magic of controlled boost cannot be understated in this sort of application.

Even with the toughest pistons on the planet, a critical element to this whole package is engine cooling. With a robust piston and tough alloy valves, the weak link soon becomes the head gasket. After studying head gasket failures Kenny felt that increasing coolant flow would alleviate that problem. It did. The engine uses dead soft copper head gaskets with stainless O-rings embedded in receiver grooves in the cylinder block. A 14-gallon tank of iced water provides the cooling source necessary for each run. If the engine does lose a head gasket it would instantly pressurize the coolant tank and explode it, so the main water tank is equipped with a pair of TurboSmart, Big Bubba blow-off valves that release water pressure to the cylinder heads. The tank is equipped with a pressure transducer monitored by the MoTeC ECU. When pressure reaches 45 psi, solenoids remove the manifold pressure reference and the valves open to release the pressure.

Duttweiler uses Diamond pistons in all the engines along with other ultra-stout components. He calls it the Kryptonite combination because the parts are absolutely reliable. In the absence of a major over-boost, or a lean condition due to an injector problem, these components have no trouble dealing with the high cylinder pressures generated by the turbos. According to Kenny all the engines have the same Dart Iron Eagle blocks, the same Dart cylinder heads and the same camshaft specs. The only major difference is the stroke and the attending rod length which he prefers as long as possible to minimize rod angularity with the high boost pressures.

To make the kind of power these engines produce requires about 4100 lbs./hr of fuel through the engine. That takes a pair of Seimens 225 lb. fuel injectors for each cylinder, augmented in each runner by a mechanical injector controlled by the ECU. At about 85% duty cycle the electronic injectors max out and begin a slow decay in flow. At this point (about 35 pounds of boost) the ECU turns on the mechanical injectors. The mechanical injectors have a high enough flow rate that the ECU can then throttle back the electronic injectors with a specified tune table that reduces the pulse width to an easily sustainable flow rate. With the MoTeC, they can drive both the Seimens injectors on each runner with a single driver and enable the mechanical system for supplemental fueling.

That much fuel flow requires a robust ignition source. According to Kenny, you are trying to fire almost a full intake port full of fuel every cycle with a .013 plug gap. It takes a lot of energy to burn that mixture and they have settled on a 250 Mj M&W ignition system with MoTeC management. A 19/gpm pusher pump on the fuel cell is driven off the back of the dry sump pump via a cable.

For the 2017 season, Kenny is departing from his traditional small block ware to construct a 441-cubic inch (4.165x4.060) LSX powerplant to attack the A/Blown Fuel Streamliner record that currently stands at 409.986 mph. He could get there with a traditional small block, but he was so impressed with the potential of Dart’s new LS head, he decided to try it for this SCTA class. Like the small blocks, the new engine uses Diamond pistons and Trend DLC piston pins as shown in the accompanying photos. Trend pushrods also complement the package and Duttweiler has absolute confidence in them. Poteet owns the B, C, D and F Blown Fuel Streamliner records and he is intent on taking the A record at Speed Week.

As fact would have it, the Speed Demon successfully attacked the A/Blown Fuel Streamliner record at Speed Week 2017, raising it from 409 mph to 423 mph using the new LS engine with Diamond pistons pumping out the horsepower. Then to ensure that they would win the Hot Rod Magazine Top Speed trophy for the 7th year in a row, they changed engines and installed the Diamond equipped 368ci small block Chevy at high boost and made a 453 mph blast to put the trophy out of reach for other competitors. The new Speed Demon has made eleven total runs since its construction all above 400 mph. With Diamond pistons on board, George Poteet has amassed a grand total of 43 runs over 400 mph, more than all other competitors combined since 1947. They have the right combination and the Speed Demon is expected to continue its reign of terror until there are no more records to conquer.