A former bracket racer, Bill Gregan returned to the track to do battle in limited tire class racing. His Fox-body Mustang, a former Highway Patrol car, got a second chance as a nitrous-fed, racing machine.

Few drag racing disciplines instill the importance of consistency like bracket racing does, and few spots in the country have produced as many fast racers as Bradenton Motorsports Park in Bradenton, Florida has over the years.

Bill Gregan got his start in motorsports at Bradenton as a teenager, mixing it up with the best of them on Saturday nights in a 4.70 dragster. “That’s really where I learned about racing in general,” says Bill Gregan. “I was lucky enough to race with those guys, and all that seat time got me comfortable in a race car.” In his early 20s Bill took some time off from the drag strip to pursue his career goals, and when he decided to get involved again, he noticed a new trend emerging. “The radial and small tire scene was just starting to pick up with the Orlando World Nationals stuff,” he says. “I was really interested in that, and I made it my goal to compete in that style of racing instead of going back to bracket racing.”

Fast forward to today and Bill has become a key player in Ultra Street racing, a national series with a 275mm-width spec radial tire rule that’s a fan favorite due in part to the available power combinations, stock appearance of the race cars, and the intense competition. “It’s a limited class though,” Gregan explains. “You can only have up to a 440ci small block, whether it’s on nitrous or boost, and big blocks are limited to 588 inches.”

Bill’s steed of choice these days is an eye-catching Fox-body Mustang. “I’ve always been a Mustang fan,” he says. “I’ve always loved the body style, and they make so many different things for them. I had started building a ’68 Cougar before this car, and the reason I didn’t continue with that project was because there just aren’t enough aftermarket parts out there for them. I also planned on campaigning a nitrous small-block, and with that combination you have to be able to get the vehicle to an extremely light weight, so that was one of my main concerns when building the car.”

A former Florida Highway Patrol vehicle, Bill’s Mustang was anything but race-ready when he first got his hands on it. “If you saw pictures of what it looked like when I bought it, you wouldn’t believe it was the same car,” he says. “It was just destroyed – it had been sitting forever. But I just started working on it from there, and luckily as I progressed and kept racing, people like Innovative Racecraft stepped up to help me out.”

Today that Mustang is motivated by a 440 cubic-inch Ford small-block prepared by Fast Ford Racing that’s outfitted with Trick Flow High Port heads and a Stinger 3 nitrous plate system from Nitrous Outlet, while the bottom end consists of a Callies crank and rods along with a set of Diamond pistons. It’s a combination Gregan says is good for about 1,300 horsepower at the wheels when on the bottle .

“The Diamond pistons really changed my program,” he tells us. “I switched to Diamond about five years ago after we took a look at our old pistons during an engine teardown and realized the design just wasn’t right for what we were doing. The guys at Fast Ford Racing got me in touch with Diamond and we completely re-did the design on my piston from top to bottom, and it’s been fantastic ever since.” 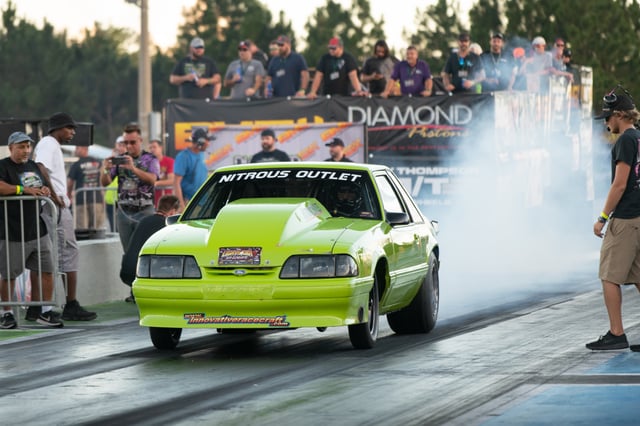 And that dialed-in setup, along with Bill’s consistency behind the wheel, has equated to success at the track. ““The personal best for the car now is a 4.72 at 146 mph in Ultra Street trim,” he notes. “Last year we were number two in the track championship for Ultra Street at Bradenton Motorsports Park. We won a handful of races and took second at quite a few others. But one thing that really stood out for me was the Snowbird Outlaw Nationals. It’s one of the biggest races we have down here, and I’ve been going to those events since I was five or six years old. My goal has always been to win that race, and while we didn’t win in 2018, we came within five hundredths of a second of taking it. I was really proud of that.”

And aside from a bad tune that knocked the Mustang out of commission during this year’s Lights Out event, Bill says it’s shaping up to be another solid season. “It’s been great – we have such good sponsors on board, and that helps with everything,” he says. “I can drive a car pretty well, but it’s the people behind the scenes who really make the difference.”

Looking into the rest of this season and beyond, Bill notes that rule changes have made Ultra Street and the NMCA’s Xtreme Street classes nearly identical. “I’d like to add three or four NMCA races to my calendar this year,” he says. The series will be running an event at Bradenton in early March, and he plans to make that the next event on his race docket. “Now that the rules are so similar, I think we’ll do really well.”

And he might have some new tricks up his sleeve for next season, too. “We’re talking about possibility switching over from nitrous to a ProCharger setup,” he says.

The prospect of such a substantial change to a proven setup might risky, but Bill cites class limitations as the driving factor for the potential switch. “Either way we’re going to finish off this season on nitrous. But the way the rules are written right now seems to favor the boosted combinations, which is common in this type of racing – the small-block-and-nitrous setup can be difficult to stay really competitive with. But Nitrous Outlet has been behind me since day one, and that’s one of things that has me on the fence about the change. Even if I do go to ProCharger, Nitrous Outlet will stay on the car.”