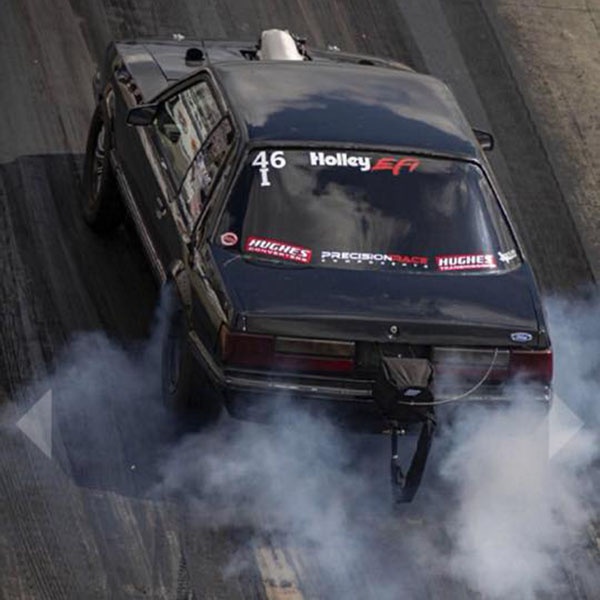 This LT-Powered Fox Body Is A 7-Second Test Bed

Adam Layman's LT-powered fox is pushing brand boundaries, big power, and has the time slips to back it all up!

Head out to your local drag strip and you’re pretty likely to find a Fox-body Mustang or two in the staging lanes. The boxy Ford two-door has been popular with racers for the decades due in no small part to its simplicity and relative light weight, along with the incredible aftermarket support that has helped make the platform so versatile.

But open the hood of Adam Layman’s ’92 LX notchback you’ll discover an unlikely power plant, even for such a modular platform. “I’ve always gravitated toward engines – I just really enjoy that aspect of hot rodding,” says Adam Layman, an Engineering Team Manager for fuel injection systems at Holley Performance from Bowling Green, Kentucky. “As early as I can recall I remember being out in the garage with my dad, either working on the family vehicle or one of his C3 Corvettes. We went to a lot of car shows and I grew up watching Dale Earnhardt and Rusty Wallace on Sundays. We never had a race car while I was growing up, but it was something the two of us always wanted. So I’d say that the single biggest reason for me buying and building this car was to go racing with my dad.”

Layman set himself on an automotive trajectory early on, getting his start at a local machine shop while in college, where he learned how to bore blocks, balance crankshafts, and other skills of the trade. A few years later he found himself at a shop that specialized in builds for the NASCAR series. “It was there where I really started to figure out how to build an engine with power,” he says.

Not long after that Layman was building power plants for Steve Schmidt Racing Engines and spending more time at the race track, testing and tuning both the team’s cars as well as customers’ machines. “That’s where I started really started working on electronic fuel injection for racing applications, power management, and things like that,” he notes. “That’s also when I began working closely with the guys at Holley, and in 2014, I was brought on as part of their product development team.”

But with a growing family and time demands of his new gig, Layman still hadn’t been able to campaign a car of his own. “I’d had always dreamt of having my own race car, but the opportunity really just did not come up until I got here,” he explains. “I actually bought this Mustang from a gentleman named Doug who works here in the Hooker Blackheart division. He started at roughly the same time that I did, and he came out here from California with the car. He had purchased the car as part of a bet with one his buddies – sort of a shootout to see who could build the faster car with a $5000 budget. Doug is a fabricator by trade, so the car was this super clean empty shell with a cage in it and nothing else. After he brought it out from California it sat out back behind Holley for a while – the bet eventually went out the window. So I kind of talked him into selling it to me – I was jonesing for a car, and the Fox-bodies were what I always wanted in high school.”

Once Adam had the car he wasted no time getting the project underway, but he wasn’t interested in doing a garden-variety Mustang drag car. “Before I came to Holley I spent more than a decade building nothing but small and big block Chevys and Fords – maybe the occasional LS here and there,” he tells us. “I really just wanted to do something that was a little different. Around the same time we were in the early stages of developing a direct injection controller for the GM COPO cars. And really, to do a good job developing a product for racers, you’ve got to run it yourself – there’s only so much you can do on a test bench and an engine dyno.”

So with that in mind Layman selected a 5.3-liter, Gen V L83 truck motor as the Mustang’s motivation, strengthening the bottom end with K1 Technologies’ crank and rods, Diamond pistons, and Clevite bearings. A Holley LT swap oil pan helped Layman get the packaging of the Chevy power plant in a Ford engine bay sorted out, while a custom grind camshaft, factory heads ported by Texas Speed, a pair of 66mm Borg Warner turbos and a supplemental port injection system – incorporated into the Holley Hi-Ram intake Layman is using – helped to round out the package and ensure that the motor would be well fed.

“On the street it runs completely on direct injection, and on the track it’s on 100% direct injection until it gets past ten pounds of boost,” he notes. “At that point I start to blend in supplemental fueling through the ports.” All in, Adam says the engine combination is good for about 1230 rear-wheel horsepower as-is, but there’s more left in it. “There’s still more tuning to do, and I’m pretty confident that it’ll make over 1300 at the tire when we’re done with it.”

Layman built the car mainly for Hot Rod’s Drag Week competition, which takes racers to a number of different tracks over the course of a week – all of which are driven to and from in same cars the competitors are racing in. No support vehicles are allowed.

“We did nearly a thousand miles in total this year, so the biggest thing about Drag Week for me is durability,” Adam says. “With just me and my dad going, the last thing I want to do is build a car that’s really temperamental, so everything was done around the idea of durability. That’s why I didn’t want to some stock bottom end kind of deal, and instead we put a good crank and piston in it and stuff like that. And those Diamond pistons have been holding up phenomenally. I’m always checking for things like cylinder leak down, and the stuff just hasn’t moved. I can’t tell you how many hundreds of sets of Diamond pistons I’ve used in engine builds over the years – I’ve always loved their stuff. We needed this engine to be durable not only for Drag Week, but also because we’re using the car as a test bed. When you’re developing stuff, you don’t always nail it on the first shot, so I needed something that could tolerate some abuse.”

Layman finished in second place in his class at Drag Week 2017, but his setup was so much quicker this time around, it actually created some issues for him.

“Last year I was in Super Street, Small Block, Naturally Aspirated. This year I was Super Street, Small Block, Power Adder. So a different class with basically the same chassis rules. My biggest problem this year was that my car was faster than it was certified to. We didn’t have time to upgrade to the 7.50 certification, so we were stuck with the 8.50 certification from last year. The first run out the car ran an 8.26, and runs that are faster than your car is certified for aren’t accepted at Drag Week – you get a 20-second time slip for the day instead. So I basically had to get out of it at the eighth mile to stay in my bracket, and the two 20-second time slips I got over the course of the week threw my average off completely.”

But don’t worry – Adam’s already got his sights set on Drag Week 2019. “I want to win it next year,” he says with a chuckle. “We’ll run it in the same class, and over the winter we’re going to build the car to the best of my ability. The cage is getting upgraded for the certification, and the 8.8-inch rear we’re currently using will probably get swapped for a 9-inch. We’re also going to take some weight out of the car, and we may try a different set of turbos on it. I want to get the car to a point where it will reliably run in the 7.50, 7.60-range every day at Drag Week. At that point I may not be the fastest, but the other guys are going to have to beat me and make it through the whole week.”