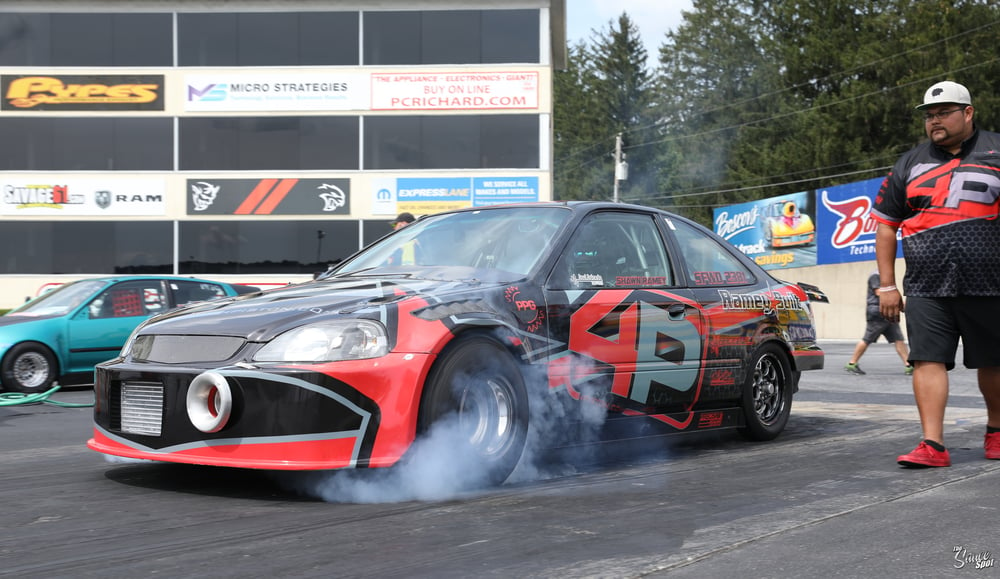 Ramey Racing is a force in the import drag racing world. His B18-based Honda engines are making over 1,400hp and recently he made a 7-second, world-record pass.

Those who set and break records, tend to be a tenacious lot. Bringing innovation to a particular realm  not only requires an obsessive passion for it, but a desire to forge new ground: That describes Shawn Ramey to a T. As the owner of Ramey Racing, he has helped numerous racers take their builds to the next level and has personally set new benchmarks in import drag racing with the team’s sixth generation Civic coupe.

“Hondas have always been important to me,” says Ramey. “It is something I grew up with and into over the years of modifying cars.” That experience has undoubtedly paid off for Ramey and his team in 2017, as he now holds two world records with the car: one for the OGS1320 SFWD class with an 8.156-second pass at 186mph, and another as the first small tire Honda to run a 7-second quarter mile pass of 7.956 at 189mph. Both records were set this season.

“I like the idea of entering into something yet to be done,” he says. “Our team sets out to continue to push the Honda drag racing world to new levels with each pass.”

Of course getting the front-drive machine to this level of performance is no small task. “We have no issues making horsepower,” Ramey explains. The main issue with any FWD car is keeping that power stuck to the ground!”

Ramey says the main class requirements they’ve built the car around are a 24.5inch tire, a 72.9mm turbo and a 2,400-pound minimum weight, though specific events may have some unique rules that require small alterations. Though he couldn’t go into some of the particulars of the build for competitive reasons, Ramey does offer some insight into their general strategy.

“We build, sleeve, and assemble all of our own motors at our facility in Virginia Beach,” he said. “LA Sleeves and Diamond Pistons are used in all of our blocks, along with Web camshafts. We also run a custom exhaust manifold from Sheepey Built, a PPG gearbox, and a Precision Gen 2 class legal 72mm turbo.”

A Motec M800 ECU manages operations, and all of the car’s custom wiring and configuration was done by RaceSpec. “We won’t go into too many details, but it is a B series GSR block like most use within the class, with a little magic only found at our shop!”

Ramey says that Diamond pistons are a mainstay in the team’s build strategy. “We run our own custom spec Diamond piston that we also offer to our customers for their builds.” “We have had great success with Diamond Pistons in all of our projects over the years, and they are what we recommend to every customer. We have set records and won many events with no issues!”

After nearly a decade of competing in OGS1320, and annual visits to the World Cup Finals, Fast Fest Live, and numerous other events, 2017 proved to be the season where all the hard work that the Ramey Racing team puts into their builds was showcased in no uncertain terms. “The memories from this car and team will last a lifetime,” Ramey says. “Between prepping for events, traveling to events, thrashing and going rounds at events, we make memories every weekend we go out. I have to thank my family, team and sponsors for the support that they give me over many racing season.”