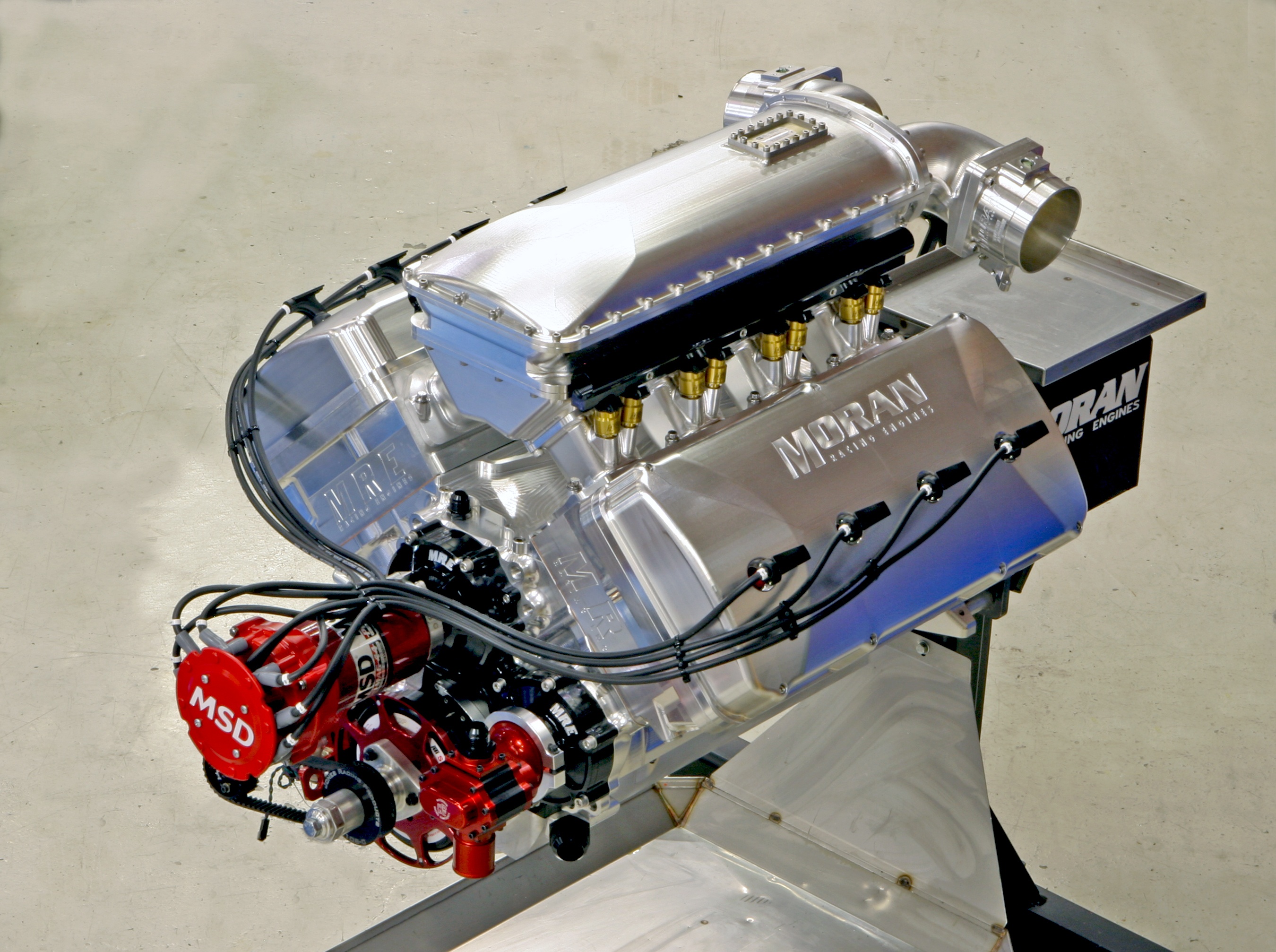 Race engine builder Mike Moran is no stranger to horsepower. He’s been doing it for years with great success–his engine was the first to break the five-second quarter mile barrier– but his latest endeavor sounds more like science fiction than reality.

Moran, you see, has reset the bar when it comes to developing horsepower. He recently bolted two gigantic 106-millimeter turbos to a billet engine of his own creation and blasted out a record-shattering dyno run of 5,295 horsepower. Incredibly, despite being a racer to the core, Moran didn’t mind sharing his secrets and how he designed an engine from the ground up to produce power levels that previously were attainable only by Top Fuel engines that started tearing themselves apart the second they first fired up.

“This is an all-new motor,” Moran explains. “It is all billet from the intake to the oil pan. You can’t say it is a Chevy or a Ford or anything because I designed it from scratch based on all the stuff I’ve learned from 25 years of racing. We took the best of all three (Chevrolet, Ford and Mopar) and then some of my own ideas to come up with it. I started designing it around 2010, and we finished building the first one in 2012. It’s a pipe dream motor that I had been wanting to build for years.

“There’s nothing on it that is a shelf stock piece. There’s nothing on there that you can say is definitely from this engine or that engine. It has Chevy-sized mains and a Chevy bellhousing, but it’s also got a Ford bolt pattern for the cylinder heads and a Chrysler chamber. It goes on and on like that.”

It turns out that when you are freed of the concerns the OEM engineers are stuck with—things like minimizing vibrations, packaging size, cutting costs on every nut and bolt, maximizing fuel economy and other boring things like that—you can really do a lot to increase horsepower. For example, Moran’s engine is laid out with the bore centerlines spaced an incredible 5.300 inches from each other. As a comparison, that absolutely dwarfs a Chevy big block with its 4.840-inch bore centerlines.

The stretched bore spacing not only allows for more cubic inches by punching out the cylinder bores to 4.750 inches, it also creates more room for larger valves in the cylinder heads. It is a myth that airflow in the engine isn’t important when using a turbo or supercharger because the increased pressure from the power adder will simply push all the air in you need. In fact, the opposite is true: An engine that naturally flows a lot of air will only improve its ability to make power no matter what power adder is bolted to it. Moran says he’s tried multiple valve sizes over the years, but for this engine he’s running pie-plate sized 2.700-inch intake valves. Combine that with the engine’s 1.00-inch intake valve lift and we’re talking about tons of air moving into the combustion chambers to be mixed with fuel.

The valves are activated by a giant 85mm diameter camshaft cut from tool steel. The cam’s big diameter helps it limit flex, but it also mates to roller lifter from Jesel that are gigantic in their own right. Lots of thought has been put into maximizing valve control, and Moran says that the engine should be capable of 9,500 rpm or more thanks to all the details we’ve already listed as well as a set of valve springs with an open pressure of 1,100 pounds.

The rotating assembly is equally trick. Moran had a billet crankshaft cut with a 4.500-inch stroke. Combined with the 4.750 bore, that makes a total displacement of 640 cubic inches. But the coolest part is the set of billet Diamond pistons that connect to the crankshaft with eight  aluminum connecting rods.

“I had looked around trying to find the right company to help me make a set of pistons that would meet all my requirements. Diamond was the one that was willing to take on the challenge. Bob Fox ended up asking me if I could sit down with them and meet face-to-face. I really appreciated the interest they took in this engine, because not just anyone could come up with a set of pistons that worked for this. And so I let them take the lead on that, and they designed the piston package and built the final product.”

Like everything else in the engine, the pistons are cut from billet. They are a boxed piston with a slipper-skirt design to cut weight and friction, and domed to dial in the correct compression ratio. Diamond has each piston hard anodized and then applies an anti-friction coating to the skirts on top of that (called the Double Diamond coat). Surprisingly, it still uses a relatively thick (by racing standards) 1/16-inch top ring. The thicker piston ring, Moran explains, is simply to get enough cross-sectional area to properly seal against the insane combustion pressures created when the alcohol fuel charge is ignited.

“The motor has been out there a few years, but it’s never really been noticed because it was limited by the existing turbo technology,” Moran says. “The biggest turbos we could get were 98 millimeters, and they were just too small for all those cubic inches so the engine could only make about 3,700 horsepower. We knew it was capable of so much more.

“I had been lobbying Garrett to make a 106-millimeter turbo, something that flows about 300 pounds a minute worth of air. So after years of lobbying, I finally get a message that Garrett has a pair of bigger 106mm turbos prototypes for me to test.  We had the engine on the dyno right then, so I had them overnight a pair.

“As soon as we bolted them on, the engine went right from 3,700 horse to 5,300 without even thinking about it. It was finally getting enough air into the combustion chambers to make the power it is capable of. You need a lot of turbo to feed over 600 cubic inches. But I know there’s a lot left in this motor. We only pulled it to 7,500 rpm and it will spin up to 9,500. We only had a few hours because we had another engine scheduled for the dyno the next day, and I didn’t want to take a chance of hurting the engine because we were hurrying and missed something.

“We’ll get it back up on the dyno again soon with a little more time to do some proper tuning on it, and I expect it will make an even bigger number then. After that we’re shipping it off to Australia. This one is going to Rob Campisi down there. He has built the twin to my Pro Mod Mustang here in the states that I still have not run. My car has been done for three years and I’ve never run it because I just don’t have the time. He’s getting the exact same motor that I want to put in mine, and I can’t wait to see his car running this year so we can all see exactly what all that horsepower is going to do.”